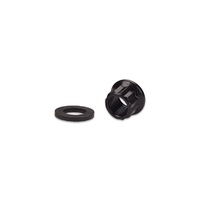 IAG's / ARP 14mm Head Stud Set is designed for use on high horsepower Subaru engines. The larger size of the stud increases its load capacity which in turn helps to prevent the cylinder head from lifting and creating head gasket failures. The oversized head studs require drilling and tapping the case as well as splitting the locating dowels to accept the larger studs. In addition, the cylinder head will also require the head stud hole clearances enlarged to accept the studs. Set Includes:

Drilling and tapping the engine case