Air Oil Separators (AOS) are an essential component that should be fitted to your performance Engine.

Catch cans are an air/oil separator that does not actively drain the collected oil back into the engine. Most catch cans require you to drain the contents out manually. This is acceptable on some engines that produce little oil in the breather system, can however become inconvenient on other high power turbo charged engines that produce more oil and therefor require catch can's to be drained frequently.

In stock configuration, the un-baffled crankcase pressure is re-circulated back into the intake stream. This can be harmful for two reasons: 1) Oil vapor mixed with the intake air effectively lowers the overall octane rating of your fuel. The more oil vapor that is sucked back into the engine, the more likely you are to experience engine knock (also referred to as detonation) that can destroy an engine. 2) Oil vapors cause oil & carbon build up over time. The intercooler, intake manifold & intake valves suffer the worst. This oil vapor can create air turbulence that leads to various running issues. 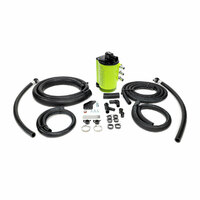 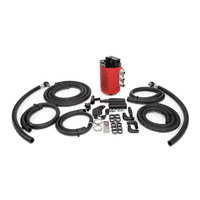